Weaving the pages of history for Central Australia 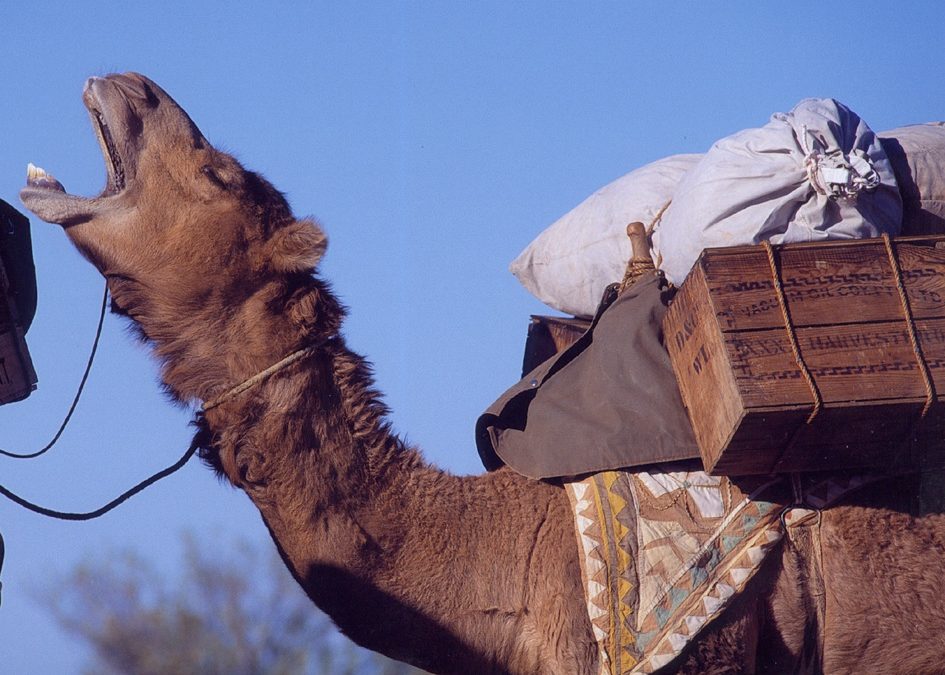 The last camel train
In the Year 2002 to mark the Year of the Outback, a train of camels and their cameleers re-enacted the last camel train delivery of mail from Oodnadatta to Alice Springs. As a teenager Chansey Paech alongside his grandfather, Peter Ross, journeyed 30-40 kilometres a day over 4 weeks with Marcus Williams, owner / cameleer of Pyndan Camel Tracks, and Eric Sultan, grandson of cameleer Sultan Mahomed, among others.

Chansey is a descendent of the Arrernte and Gurindji peoples, whose lands span from Central Australia to the Victoria River regions. He describes his family as ‘somewhat similar to that of a dotted canvas, where no two dots are quite the same … Like my family, I intend to weave the pages of history for Central Australia as a progressive politician who fought for positive change for the people of Central Australia and the Northern Territory’.

Chansey urges us to never forget the contributions of those who have laid the foundations for our future today. In his maiden speech to parliament in 2016 Chansey paid his respects ‘to the founding pioneers of Central Australia, in particular my great-uncle, Walter Smith, and the many Afghan cameleers who have played a vital and positive role in shaping our community’s social fabric.’

Who was the cameleer Walter Smith?
Chansey’s great-uncle Walter Smith (1898-1990) was a cameleer, prospector and bushman. He was born at Arltunga, Northern Territory, the eldest child of eleven children of William Smith, a goldminer of Welsh descent, and his wife Topsy White, of Arabana-European descent. Walter was also known as Walter Purula (Perrurle) and Wati Yuritja (Man of the Water Dreaming). His childhood was spent primarily in the company of other Indigenous children; he gathered ‘bush tucker’ foods and honed his tracking and direction-finding skills. Walter grew up learning to speak and write fluently in English as well as to speak the eastern Arrernte and Arabana languages although he had no formal education.

By the age of 12 Walter was already a skilled bushworker. He had good mining skills, could build fences and yards, sink wells, make green-hide ropes and plait whips. About this time he made his first major trip to the Simpson Desert, using camels, accompanying hundreds of Arrernte to the last great Simpson Desert ceremonial gathering; the 1914-15 drought and the 1919 influenza epidemic killed so many senior people with deep knowledge that ceremonial gatherings thereafter took place on the desert-fringe cattle stations or at the edges of outback towns.

Who was Topsy Smith?
When Walter’s father William Smith died in 1914, the large family moved to Alice Springs.  Walter’s mother Topsy Smith is now recognized as a pioneer of central Australia, although she received little recognition during her lifetime. Topsy cared for all the Aboriginal children of the town in ‘the Bungalow’, supported Ida Standley to run the school, and worked her whole life caring for all the children as her own and trying to keep them safe.

Walter got work with the Afghan cameleer Charlie Sadadeen, meeting the train at the railhead at Oodnadatta, South Australia, and carrying the load by camel team to Alice Springs. Occasionally he went as far as Katherine.

The many skills of Walter Smith
Walter worked as a gold prospector, gem fossicker, dogger (dingo trapper) and a miner, and he was also a meteorite and fossil collector in the Simpson Desert. Museums paid him for his specimens. He rode horses and camels, mustered cattle, shepherded goats, built bush huts of stone and brush, and butchered animals. He understood over thirty desert languages and dialects and learned the traditional law, customs and songs of many groups.

Perhaps the most widely travelled cameleer in Australia, Walter Smith worked in the desert areas of South Australia, western Queensland, the Northern Territory and Western Australia. He was the last of the Red Centre’s original cameleers, retaining working camels into the 1970s, mainly for prospecting expeditions. He died on 14 June 1990 in Alice Springs.

[A lot of this information and the photo of Topsy Smith come from R G Kimber’s book on Walter Smith: Man from Arltunga – Walter Smith, Australian Bushman, R. Kimber 1996.]