Ride a camel to see the birds! 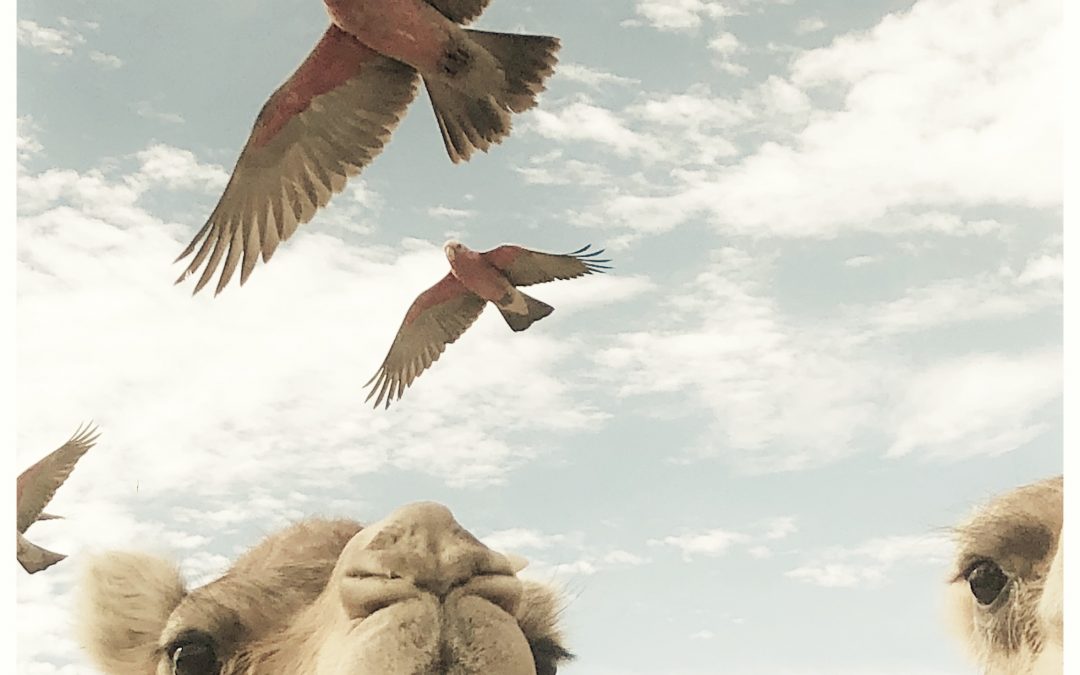 We are surrounded with abundant birdlife here in the Alice Springs (Mpantwe) region of central Australia.  When you take a camel tour you travel very quietly, so you are very likely to see and hear many of the birds that live in our beautiful White Gums Valley.

The late afternoon and early evening camel rides are a great opportunity to see and hear native birds.  Some of our more common bird residents and visitors include:

·     Cockatoos – the sulphur-crested and the red-tailed black cockatoo are frequent visitors to Pyndan, and throughout the Ilparpa and White Gums valleys. Sulphur-crested cockatoos have a loud raucous screech and red-tailed blacks have a harsh metallic ‘krurr’. They may not sound beautiful, but they are glorious birds to see and we love living with them.

·     Galahs – you will probably  hear them before you see them, as they travel in loud noisy flocks. Their call varies from a pleasant ‘czzk-czzk’ to a loud screech.

·     Budgerigars – in small family groups as they nest and breed after rain, and then assembling in bigger and bigger groups until we have fast-moving clouds of budgies, a thrilling sight

·     Falcons: Look out for the Australian Hobby, a very fast little falcon, best seen hunting dragonflies in the evening. Hobbys often chase larger birds – in play (or bravado?). Their call is a rapid ‘ki-ki-ki-ki’. The Grey Falcon is a spectacular hunter, stooping vertically after birds in the air or to snatch up lizards or mice from the ground. Its call is a loud slow ‘kek-kek-kek..’

·     Kites: the black kite, the black-breasted buzzard and the whistling kite are all relatively common large birds of prey which you may see while on your camel rides.

·     Grey-crowned or white-browed babblers. Babblers like to live in open or scrubby woodland and prickly thickets.  We have several babbler nests on the property.

·     Wedge-tailed eagles – our largest raptor bird, with standing height up to one metre and with a huge wingspan. Wedge-tails can be seen soaring to great heights on the air currents through the valley. They have a relatively long life-span, with juveniles not reaching maturity until they are 5 to 7 years old.

·     Splendid Wrens: Pyndan Camel Tracks has resident splendid wrens who make this their home generation after generation. The males are mainly blue, while the females are brown above with a bright blue tail, and a chestnut patch around the eye. Their nests are untidy domes of bark, leaves, grass and fur well-hidden in low bush or among dead twigs

·     Grey-crowned or white-browed babblers. Babblers are chatty, entertaining birds, who move around in family groups. They like to live in open or scrubby woodland and prickly thickets.  We have several babbler nests on the property.

And that’s not all! There are many more birds to be found on Pyndan Camel Tracks property and to be seen on your camel tours, including:

For a more comprehensive list of birds in the Northern Territory we suggest you visit the NT Tourism webpage: Bird watching around Alice Springs

Desert Park bird show
We highly recommend the bird show that’s held every morning at the Alice Springs Desert Park. It’s so exciting with the birds swooping into the show and the bird handlers are very knowledgable.