Meet our friends, the Babblers 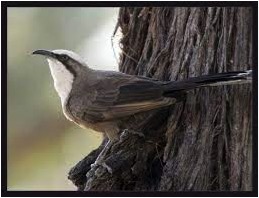 At Pyndan Camel Tracks and on your camel tours you will most likely hear the babblers before you see them – they are chatty, sociable and sometimes frankly hilarious birds. They can be seen in small groups, hopping around to check out food on the ground, and babbling away to each other.

Here at Pyndan we love the babblers. They are curious birds and they chatter continuously to each other. We once saw three of  them play an extended game of bottle-top soccer on the verandah, spinning and flicking a bottle-top, and leaping up and chirruping with excitement each time they made it spin along the ground. They only stopped when we burst out laughing: they realised they had an audience, and fled, scolding and chattering all the way.

Look out for their nests as you are on your camel ride – they are generally 3-6 metres above ground level. The nests are large untidy domes of sticks in an upright fork, horizontal branch or prickly-leafed bush. Grey-crowned babblers line their nests with bark, grass or wool – you can see why they like living near our camels!

Babblers like to live in open or scrubby woodland and prickly thickets.  We have several babbler nests on the property. As grey-crowned babblers are becoming rarer in settled areas,  we are thrilled that they choose to live with us here at Pyndan Camel Tracks.