We are still awaiting an announcement about dates for 2021.

What is the Alice Springs Camel Cup?

The first Camel Race was run in 1970 in the dry Todd River Bed as a bet between two mates, Noel Fullerton and Keith Mooney-Smith, and was an added attraction at the Alice Springs Centenary Year Celebrations.

The camel race proved so popular and hilarious that plans were made by the Lions Clubs to hold the Alice Springs Camel Cup on an annual basis. The first permanent venue was Traeger Park, but low fences and a grass track were thought to be too dangerous, so in 1975 the event was moved to Arunga Park Speedway, with some success. Since 1979 the Apex Club has held the Camel Cup on its own arena at Blatherskite Park, a section of the Central Australian Show Society grounds, with a commentary and judges’ tower being erected, for telephone contact to the ‘pits’ and ‘centre arena’ to keep the crowd informed.

Where is the Camel Cup held?
From 2018 the Alice Springs Turf Club has hosted the Camel Cup at Pioneer Park although the Cup was cancelled in 2020.

Are there Alice Springs racing camels?
If you want to sample a slice we have Shadow and Sparky, who are ex-racing camels from the Queensland camel racing circuit. We want our camels to be walk with you slowly so we don’t keep any active racing camels.

After the Camel Cup, you’ll be inspired to join our sunset camel ride!

Looking for more outback camel racing? The Uluru Camel Cup is held during a weekend of activities at Yulara near Uluru on the last weekend in May. 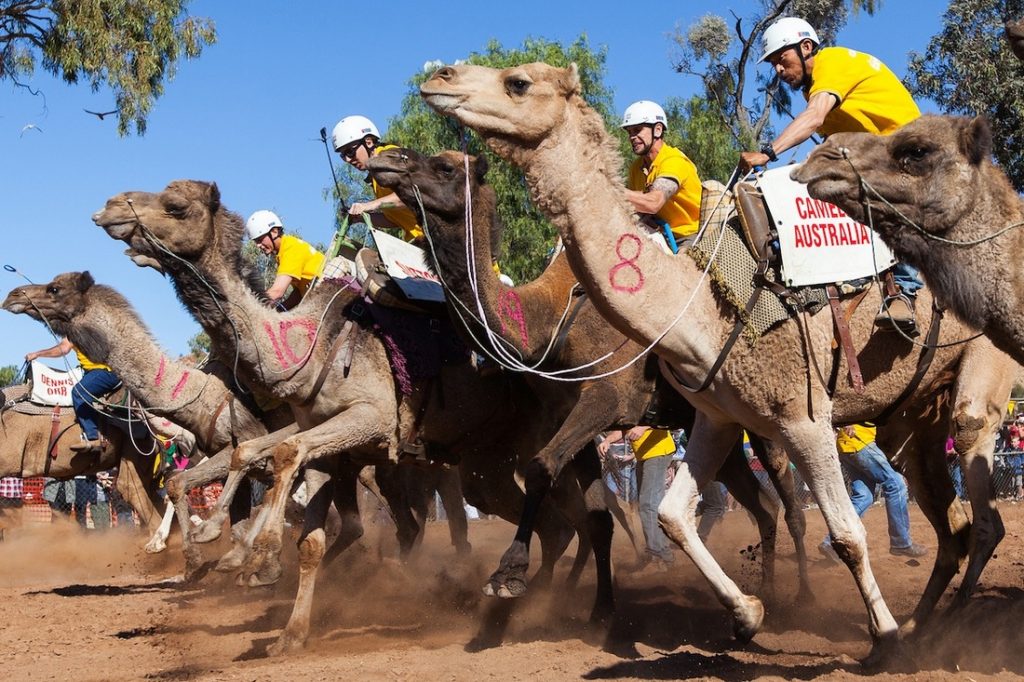